What is it like to use a thrusting toy?

By Jed Biggs one month ago. Posted in Sex Toy Guides

Our reviewer Jed tries out the Petite Thrusting Jack Rabbit. If you've ever wondered what a thrusting toy is like, wonder no more!

If you’re looking for hot and passionate intimate action, look no further. This toy has got you covered.

At first glance, this isn’t the kind of toy that would usually catch my eye. Believe it or not, it was the glitter finish that persuaded me to click. I’m like a magpie to anything shiny and although stereotypically glitter tends to be reserved for girly individuals, I want to go ahead and break that cliché as I feel like us men can be equally as enthralled with a bit of sparkle.

Growing up, my attention would always be drawn to shiny things in comparison to a more ‘plain’ option. It seems that’s definitely followed me into adulthood.

Its discreet size and sparkling finish weren’t the only two details that pulled me to this toy. I’ve always been rather curious when it comes to Rabbit vibrators. Not only for their other worldly look, but also the dual purpose aspect. Having the option to stimulate both internally and externally with one toy is obviously a hell of a lot more convenient than juggling two separate toys, especially when by yourself.

When starting my transition, I was very against the idea of internal stimulation as I felt like the additional dysphoria wasn’t worth the hassle. I definitely still approach the act with cation and go through periods of being hesitant, but for days where I’m up for the challenge, this is more often than not the toy I reach for the most.

This toy has 10 intense functions of vibration and 4 patterns of synchronous rotating and thrusting action, with an easy to use button control plate. A function that I love about this toy is that it actually has an auto off switch. I can’t count the amount of times where you abruptly hit that super sensitive point and have to wrestle your vibrators control panel to jump down through all of the settings until it turns off. It’s certainly a more positive way to end a session. An added bonus is that the toy is also waterproof and ready for intense orgasmic action in the shower, bath, hot tub, or wherever else you want to get down and dirty.

I personally like toys that are super soft and smooth, with squishy movable parts. I love how flexible and gentle the clitoral rabbit is, meaning you’re not having to awkwardly set things into place and worry about flicking or prodding sensitive areas.

That being said I couldn't recommend this product highly enough. A soft but satisfying toy that will get you to a place that will literally make your legs tense up in ecstasy! 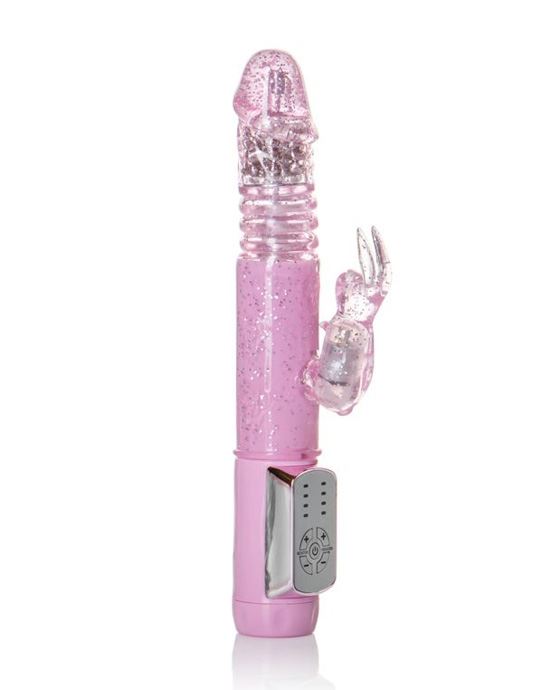 Verified Purchaser
Thanks for this. Arrived discretely and on time
Brianna, Rotorua
20th January 2021